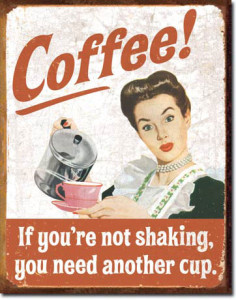 Once again, I am going to discuss something that I collect. Shocking, I know! But as I am packing up our condo into boxes to move into our new headquarters, I am always amazed at — though I’ve become the closest to a minimalist that I will ever be — how MUCH beloved things I have in my collections. One thing I have a googol of is coffee mugs! I looove coffee mugs! The reason why I love coffee mugs is because I love COFFEE. But here’s the cruel, cruel injustice & joke: 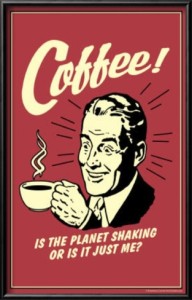 Yessiree, I was diagnosed, in October of 2008, with a caffeine allergy. I didn’t even know this existed! As it was explained to me, initially, is that you can actually “poison” yourself by drinking an overabundance of caffeine over a stretch of time (not to be confused with a drug overdose, because caffeine IS a drug and this can happen, as well, but that is different than what I have). After learning this, I went out and did all kinds of research & homework. Sure enough, it is true! Because caffeine is a psychoactive substance, in *extremely* high doses it can become toxic and cause things as mild as allergies & as severe as death. Whoa. There’s a difference between an overdose and an allergy, though (as I already stated), and this can be determined by your physician — an overdose oftentimes mimics mental illness. Which, when I was in my early 20s — drinking copious amounts of Cafe Bustelo by the bucket loads — it was *thought* that I had Panic Disorder (chronic panic attacks). Ironically, they always got better/went away when I cut caffeine out while on health kicks. Catalog this under: Things that (should) made you go hmmm. Turns out I had no anxiety at all, I was having an allergic reaction! When they ran me through the symptom checkoff list, I was the poster child for a caffeine allergy kid! I had about 18 out of the 20 symptoms. It was an a-ha moment, and I was DEVASTATED! I had spent two decades living my life in coffeehouses, working off & on as a barista in random artsy cafes, and I consumed about 3 pots of piping hot java a day. I. Kid. You. Not. And I don’t like your typical medium roast blend of beans… I like my coffee like I like my men: strong, bold, stalwart, robust, daaark, and…… Italian, French, Cuban, Jamaican & Guatemalan. ::smirk:: No, seriously, though… I drink coffee that is powerful enough to remove industrial paint. If I turn the mud upside down, it takes about 30 minutes to un-adhere to the side of the mug. It’s not mud. It’s rubber cement. 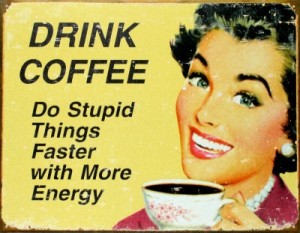 Anywho, before I get going off about what this article was intended to be about, let me list what MY symptoms were, in case this could enlighten & inform any one of you. If you’re having ongoing issues with the same things, yet all your routine tests are checking out A-OK — but you know in your heart-of-hearts something is amiss — consider the possibility that maybe your body’s immune system is having a very real response to an IgE antibody. The tests to determine if you’re allergic to caffeine are simple — I had a basic skin prick test, but there are also oral tests. If either of these tests come back ineffective, then they’ll do a blood draw that’ll have results back in a week or two (7 to 14 days). Here were the things I chronically suffered with for almost 20 years: migraines, anxiety, lack of focus or ability to concentrate, glands swelling, heart racing/palpitations, severe fatigue, dizziness, extreme jitters, chest pain, numbness in hands, muscle pain, shortness of breath/tightness of chest, flu-like symptoms, mild vision problems, upper back pain (between my shoulder blades), and cold sweats, as well as hot flashes. Once I quit caffeine, almost every one of these symptoms vanished like a deadbeat baby daddy with a crack addiction, never to be seen again. #iloveagoodanalogy Though the diagnosis was harrowing, my quality of life came back, so I suddenly was forced to develop a newfound respect for Decaf, of whom I thought was a useless S.O.B. my entire life. Now decaf has mad street cred for having my back. Bros for life!

But here’s the amusing part… Since summertime 1993, my kitchen has been decorated in a coffee theme. It has not changed since the day I moved out of my mum’s house and into my first (seafoam green, Atomic age) apartment! I STILL love coffee paraphernalia; caffeine or no caffeine! So even though a lot of my kitchen decor is a couple decades old, I am still collecting — and what I collect most of all is COFFEE MUGS!

So, if anyone is ever my Secret Santa… ::bateyelashes::

Since we move into our new dream house this weekend, I took some pictures of my favorite mugs in my collection. I emphasize the word some because there were quite a few already packed up, like my Disney Villains, Bad Batz Maru, Boris Vallejo, Plan 9 from Outer Space mugs, etcetera, etcetera.

Most of these were gifts, but I will try and find links to similar mugs for you! 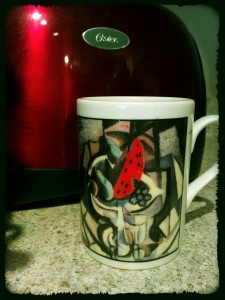 My super keen Salvador Dali mug. I like this one for when I’m in an artistic mood and planning to paint/create the day away. There are many funtastic Dali mugs all over the Internet, but Cafe Press has a nice array to choose from! Go take a gander! 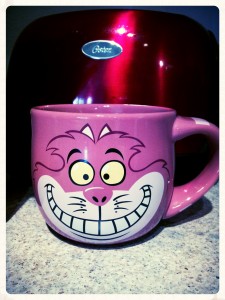 My VERY favorite cartoon character is Cheshire Cat! #purrrrr This mug is so colossal that I like to drink more than decaf out of it ~ I like to eat soup, cereal & ice cream out of it, too! He’s a versatile pussycat. 🙂 This was originally from the Disney Store, but I don’t believe they carry it anymore (since I’ve been carrying it around for over 15 years), but check out THIS cool *disappearing* Cheshire mug! Yes, check it out my sweets…… who love me galore. ::winkwink:: ::hinthint:: 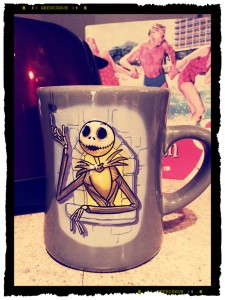 Speaking of mugs from the Disney Store, here’s another one: Jack Skellington! If I haven’t mentioned it yet (which would be quite peculiar & queer), I am a BEHEMOTH Tim Burton fan(atic)! I collect anything & all things Tim Burton, including anything Danny Elfman has done. So, it should not be surprising this is one of my best loved coffee mugs, as well. Check out Fantasies Come True. They have a sparkletacular assortment of Disney collectibles, and not just mugs but stiens too! 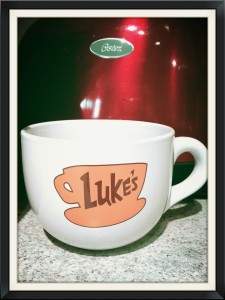 The only TV show (other than Wonder Woman with Linda Carter in the ’80s) that I EVER became wholly addicted to was Gilmore Girls. Every week, I ordered that it was “Tuesday Takeout” & the “Gillies” night. I never missed an episode, and I was crushed down in the doldrums when it ended. Therefore, I cherish my Luke’s Diner mug! The Warner Brothers Shop still sells some GG stuff (as well as many sites online), so even though the show is over, Luke’s endless pot of coffee can always spilleth over! 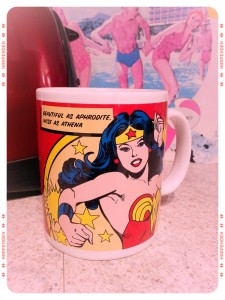 Well, this coffee mug is clearly a no-brainer for what I just mentioned up above, not to mention how often Wonder Woman makes it into my blog posts. 😛 WW can be found just about anywhere from Spencer’s at the mall to ThinkGeek.com – she is NOT in short supply! #thankgoodnessgracious I happen to be, a GARGANTUAN Retro Planet fan, also, and their mugs are pretty epic & primo, so have fun thumbing through the site! 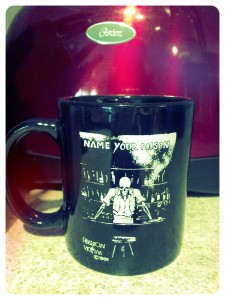 I bought this mug when I was in high school at this head shop called Headstones in Terre Haute, Indiana. I LOVED going there every year when I visited my family over the summer. I’ve been hauling this thing around since I was 16 years old. It’s traveled to 12 different houses, 7 cities, and 4 states. I couldn’t find too many things too similar that weren’t souvenir mugs from different cities, but World Market has something just as cool (if you wanna give your beans a kick! 😉 ). 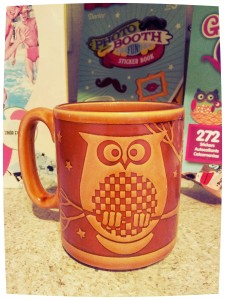 I got this mug at a thrift store in 2007, right when I made a big leap of faith into a whole new life, with nothing but a suitcase of clothes, a jumble of CDs, and my coffee pot. 🙂 This was the one and only mug I had with me at the time, and the first thing I purchased in my new home state. Since it is vintage and from the ’70s, I found you something even more adorable at Mod Cloth. For all my hootin’ & hollering on here about Mod Cloth, I think it’s obvious that I have great affection for this website. #crush 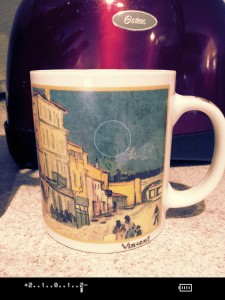 Van Gogh has held great significance in my life for a long, looong time… And I have a vast collection of Van Gogh things to solidify that. Today I’ll feature one of my mugs. I am fairly certain my mug came from a bookstore on my travels, but I have others from Chaleur ~ I love Chaleur.com! If you’re in the market for *any* artist, check out this online store. You won’t be sorry! 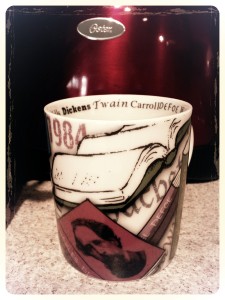 My coffee mug of classic literature & authors. I don’t know, but my guess would be that this came from Barnes and Nobles. I got it in an Easter basket from my mum. 🙂 With that said, I enjoy Book Riot’s coffee mugs for book lovers. They have a lot of ‘novel’ty items for your favorite read-a-holic or “literary artist”, as I fancy calling myself since I request that all my published books/articles be seen by more than one editor. 😛 (And as you can see, this blog is overseen by none. La la la la la la la… ::cower::) 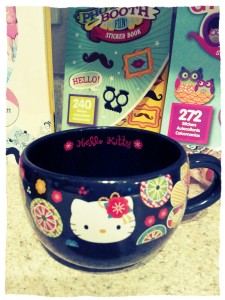 This delightful little teacup is a part of a set. My friend, who I call Tali Whacker :P, gave them to me epochs ago. They came from Sanrio, back in the day, but I haven’t the faintest if they’re still being manufactured. That was over 14 years ago. (Ugh. ::faint::) You can find Hello Kitty EVERYWHERE – STILL(!) – she never, ever goes out of fashion. I ordered these cute little *coffee* mugs from IT’Sugar, though, for a sleepover gift, and we included hot cocoa and a monstrous bag of colored marshmallows. They were a hit! Who doesn’t love Hello Kitty? I mean, c’mooon…

That, that, that’s all, foooooolks! (And yep, I have a couple Looney Toons mugs, too, but of course!)

Keep calm & CAFFEINATE on, Mavens!
(If you’re privileged enough to do those two things at the same time…) 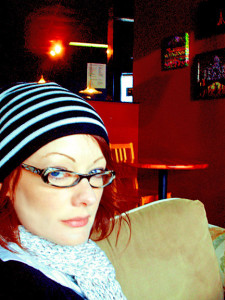 <—- This would be me before quitting caffeine, and before getting my fix one morning at a downtown coffeehouse. That is not the happy-go-lucky Angelika Frangelico you want to meet in a dark alley. Phew! She was as fire-y as her hair!

But hey, that’s the price ya pay for finding Waldo.