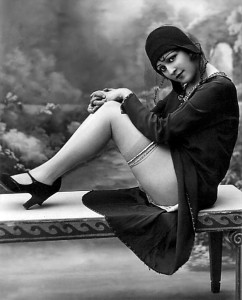 We’re all in the know that chatty Angelika Frangelico fancies hats. Fancy might be a featherweight word, to be frank. “Total madcap ardor & amour” might be more beseeming. However, hats from the 1920s are my most favs. And though I may feel inclined to write about them today because of an equally madcap ardor & amour for Downton Abbey, this was long before DA came into my life like a televised, theatrical book put to technicolor. I continue to love hats up until the mid-1960s (and there’s just about nothing I like about the 70s, not fashion, not film, not art, and certainly not automobiles! Bleck!), but the 1920s win out on my hatrack. I love the Bell hat, the Bowler hat, the Dotty hat, and even the sequined beret, but there is one 1920s style of hat that I can’t find a single outfit in my wardrobe that it doesn’t wear well with, and that’s the forever fetching Cloche hat!

(And I did say in *MY* wardrobe, so yes, it might not compliment a flannel shirt or football jersey. ::lookaskance::) 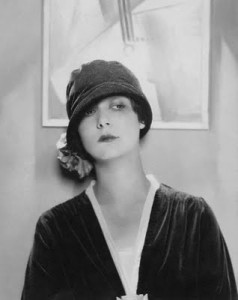 With a slight tilt above one eye, right above the brow is how the Cloche was intended to be worn.

What is it about the demure, yet dreamy Cloche? It’s just a very simple, bell-shaped silhouette hat, but it was all the rage in the roaring 1920s. It kind of dipped out of the scene and faded to black around 1933 or so, but not to fear because just like all good things, it’s made a few comebacks since! If you ask me, it never truly went out after the first one, but this pertains to an underground-ish culture of mavens and not the mainstream fashion industry. In earnest, the Cloche was actually around a lot earlier than the 1920s, though, because a Parisian fashion designer named Caroline Reboux, who specialized in millinery, invented it in 1908.  It just took a little while to take off, I suppose, but it is hard to understand why with it’s simple lines & asymmetric elegance + grace. The Cloche was quite cutting edge in it’s debut with it’s Art Deco flair! Seeing as the ravin’ maven Reboux was born in 1837, she was over 70 when she invented it, and it took a dozen years for it to gain any acclaim, so she was one hip old Frenchie! At the start, it at times was ridiculed as a “helmet”, but I’ve never seen a helmet so lovely with it’s bell shape! If I did, you’d most definitely see me walking around the hamlet like Otto von Bismarck in a Pickelhaube, but alas I prefer the bell shape — which, cloche is actually the French word for “bell”.

Cloche hats have a few different designs [as you see in the photo above]. When they first hit the scene, most are typically made of felt & quite commonly worn plain as vanilla ice cream (but still as delicious as chocolate (Disclaimer: I see no purpose for vanilla ice cream, so I am a beanist vanillaphobic and therefore prejudiced, that’s why I had to follow up about the chocolate)). Initially, Reboux wanted the highlight of the hat to be the cut & shape, and for them to be worn with the brim right above the brow. Yet, as the years went on, Cloches became more flirty & coquettish with appliqués, brooches, feathers, fans, and other embellishments. In even later years, some Cloches were made of beads or lace for a night of cocktails & dancing! Summertime Cloches even begun to be made, mostly of straw or “sisal” (hemp). Before they went out of fashion around the early 1930s, it became the trend to turn the brims up, instead of wearing them low as their design(er) had intended them. 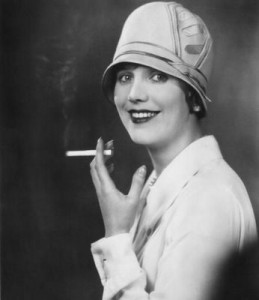 And just like I once posted about the young ladies of the 1950s with their hair bows… different ribbons adorned on the Cloche were actually messages the wearer wanted to send out — things like:

* An arrow-shaped ribbon meant a lass was single, but ALAS her heart was already given away.

* A knot meant a lady was married, like the one would eventually be in her throat when she had to shave his back hair.

* An overzealous bow basically said, “I’m a free bird and lookin’ to get it on!” (<– Notice a mating call bow *must* be big for the commonly clueless male persuasion. ::tehee::)

The Cloche gets reintroduced quite regularly off & on as the decades pass by. There’s something about a deep crown that women seem to enjoy wearing, especially smart dames because they need more room. ::titter::  That sounds like the makings of a jolly good sales pitch slogan: Look clever in a Cloche! And it’s not just because it conquers a bad hair day! (Although, before I got my roots done last night, I wore one all of last week. #stealthycoverup) Though the Cloche never hit the same peak as it did in the early 20th century (because of couture like Lanvin & Molyneux and Josephine Baker who wore them to feature the Eton crop hairdo) it made a few (re)appearances, especially in the 1960s. They’ve continued to have guest spots in the fashion industry, starting in the 1980s, as well. As late as 2007 & 2008 they were given the spotlight by Elle fashion magazine & Angelina Jolie, who wore one in Changeling. I never saw the film because I am far from her biggest fan with her subpar acting chops (in my humble opinion), but if she jumped off a bridge wearing a brilliant Cloche hat and everyone else starting doing it, more power to her! At least they bit it looking bewitching! 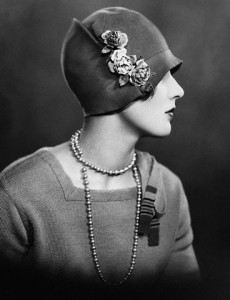 I, personally, know that if I had lived in the 1920s, I would’ve never been an aristocrat like the Crawley’s in Downton Abbey. Yet, even if I were, there would be no stopping me from being a flapper girl. The Roaring Twenties would have heard me roar for sure! I’ve always had a difficult time with a regimented ideal of what is considered “acceptable” behavior — life is too short for such things so rigid! But most of all, I wouldn’t be able to stay away from the jazzy dance clubs. I’d sooner be kept in the box my Cloche came in! I would Bunny Hop & Black Bottom until the break of dawn, and shimmy my way out of the binding societal norms. As romanticized as the noble life is, I still find the world of the flapper to be more captivating & rich. Stuffy & conservative are two things I just can’t remotely identify with. So, whenever I put on my Cloches, I don’t feel refined & dignified…… I feel like a defiant & audacious flapper (like these dames below, in their dapper daywear — I bet I could stir up a wayward ruckus with these gals). 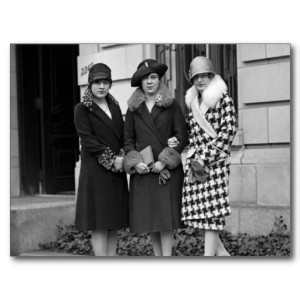 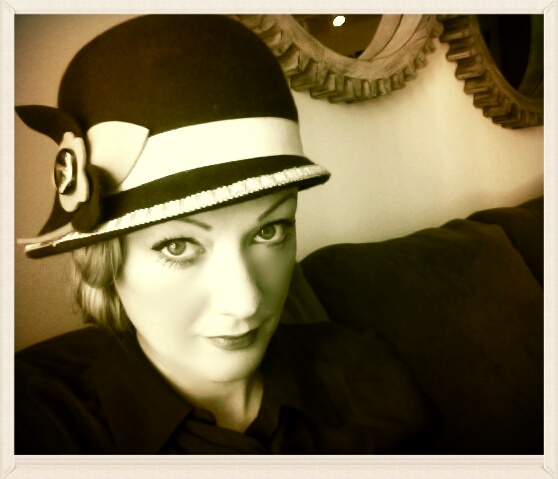 *** More photos of this particular Cloche (and me channeling Anna Bates) on the What’s Ravin’, Maven? Facebook fanpage***