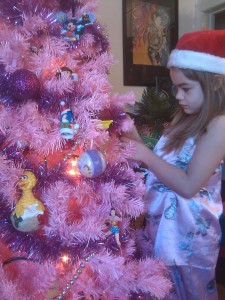 Even though it is Valentines Day that is right around the corner, I’m going to hark back a bit and talk some more about Christmas (as I did in the last post about the geek gifts I got Darling Hotbuns this year).

I love holidays! If I had to pick a favorite, it would be Halloween, but Christmas/Hanukkah/Kwanzaa would be the second runner(s) up. As of the moment, Mini Maven & I are not religious people, but we respect all religions, and I mention this “moment” because she’s so young that it could change for her someday. I, of course, am giving her the right to choose whatever belief system she wants to adopt, no matter WHAT it is, and even if it is nothing. I am doing this by educating her on all religions. You name a holiday in any various religion or culture and we’ve explored it in *some* way, even if just through books, but we try to practice one or more traditions each holiday’s turn. It’s a fun way to celebrate, not just a holiday or event, but a culture and its people. Even so, by heritage we come from Christian-based families. My family were Protestants and Presbyterians, and her father’s side were Irish Catholics. For me, you could just as easily say they were Montagues & Capulets, Greasers or Socs, Humans or Replicants, it really doesn’t mean anything more to me than a family history I did not continue to carry out. (DH’s family were also Catholics. Of all of us, none of us turned out to be what we were born into.) By no means does this mean I am not a believer. But by no means does it say that I am. I choose not to discuss religion or politics with more than my invulnerable powwow of constant pals who deserve to know my deeply intimate views. What I DO believe in is educated opinions & beliefs, secondary to honor, respect & acceptance of everyone’s personal ones. I don’t care a crumb what Mini Maven comes to believe, but I care profoundly that it comes from a vast, wide, diverse knowledge. So an integral part of this, especially as a young person, is knowing & understanding the history & reasoning behind all holidays that are celebrated throughout this shared world, and never finding the one she chooses to subscribe to as being superior. In that case, if she believed we were all derived from a unicorn who spontaneously was born to a pious pegasus and a celestial centaur on Uranus, it would only be ridiculed by me should she use it to ridicule someone else’s faith. I’d rather raise a flaky, fruity zealot than an intolerant misanthropist, but Plan A’s focus is on a well-rounded individual!

Now that that irrelevant backstory has concluded… 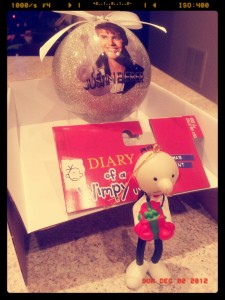 Mini Maven’s new ornaments that she picked out *this* year – 2012 additions.

With that being said, though we light a menorah, kinara, etc…. have a bitty karamu and seder, so on and so forth… Christmas is still our ruling celebration based on OUR family’s rituals. And my, my do we love Christmas! Be that as it may, Mini Maven & I have some untraditional Christmas traditions of our own that happen EVERY Christmas, without fail — things like decorating the tree to the Nightmare Before Christmas soundtrack (adore Danny Elfman!), always picking out an offbeat card (like this year it was Edgar Allen Poe wearing a Santa hat and the raven was squawking, “Poe, Poe, Poe!” ::smirk::), trying to help one family and/or spreading cheer where it’s in need, and NOW we make pork loin for dinner because this year we ordered a Honey Baked Ham and forgot they wouldn’t be open Christmas Day (#facepalm!), so DH had to run all over looking for somewhere that was open and could *only* find the Chinese market. ::guffaw:: But our very FAVORITE tradition is our TREE! Over the span of 29 years, I have collected nothing but cartoon character ornaments. Before Mini Maven was gating this earth, I contributed all sorts of superheroes, Sanrio characters, Powerpuff Girls, some Betty Boop ornaments, lots of Dr. Seuss, and my ultimate favorite character of all time, Cheshire Cat! But as you can imagine, as soon as Mini Maven was born, here came all kinds of Sesame Street, Dora the Explorer, Disney, & Spongebob Square Pants to build onto the Maven Family Tree. ::grin:: Every single year, she gets to pick out at least one new character ornament that compliments her most recent fancy. Sometimes she gets to pick out two if she can’t decide. For instance, this year she picked out Diary of a Wimpy Kid & the Biebs (yep, we’re in the boy band phase… le sigh…). After the tree is all festooned, the final step is to put the tree topper on. It has been the same tree topper since I was 19 years old — a plush Hello Kitty hand puppet that is dressed in St. Nick vestments. Hello’s done a good job & been a hard worker, in spite of what we ask of her every December, which is to basically be probed by branch for well over a month. This gives all new meaning to “being full of it”. What a topper trooper! I now call her “Well, HELLOOO Kitty!!!”

Since Mini Maven & I were flying solo, together, for the majority of her little life, EVERYTHING we did was about being great big GIRLS. This didn’t fall short of our tree — we had a bright, Pepto-Bismol PINK, artificial tree. All our de trop decorations (garland, bows, bulbs) were glittering purple & shimmering pink, too. We LOVED our year end pink tree! Nevertheless, Darling Hotbuns has been MIRACULOUS with all our quirky, erratic ways, and the eclectic & eccentric things we’ve brought into this house — from lunch boxes lining our swish kitchen cabinets, magnets from all Mini Maven & I’s Thelma & Louise adventures covering the fridge so thick we make jokes it’s going to face plant…… to all our Alice in Wonderland & Wonder Woman paraphernalia, not to mention my curiously queer artwork. He hasn’t batted an eyelash. He’s invited us to start a new life with him, while never so much as grimacing over letting us keep our old one just the way its always been. For all that, the Pepto pink tree was the one and *only* thing he put the kibash on. ::chuckle:: Who can blame him? They are pretty tacky, but it was that tack that we loved most about it. It was just so silly in all it’s obnoxious tinsel-y-ness, and we cherished it for being *our* Charlie Brown Christmas Tree with a kick! What he DID do, though, was… He scoured the area looking for a smaller pink tree for Mini Maven’s room. #heissopeachy

So this year we had an 8 foot tall Fraser Fur (it was the first real tree Mini Maven could remember!). It wasn’t quite the same, but it was different in an equally sparkletacular way, because now we’ve added the tradition of picking out our tree, from a local tree farmer, together! Never out with the old, only hodgepodging in the new. Plus, our house smelled scrumptiously sappy, just like my personality. ::bigtoothygrin:: 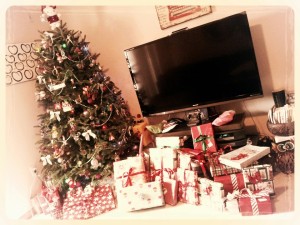 This year’s tree – 2012! We need to make up for the lacking dazzly pink & purple adornments in the upcoming years.

Here are just *some* pictures of our cartoon tree collection… We are sentimentally attached to each & every one — they all tell a story, and so many of them were given to me by people who know how much I love adding to the treasure trove. #awesomesauce (*** All photos enlarge by clicking on them.) 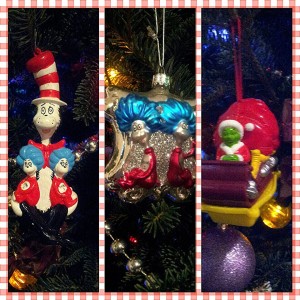 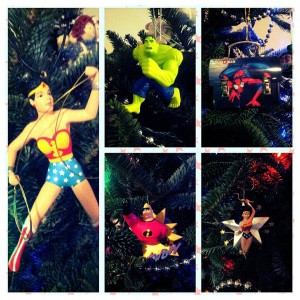 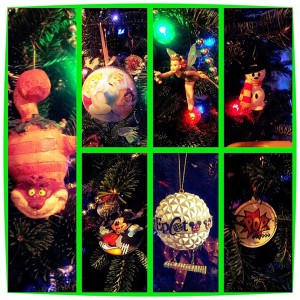 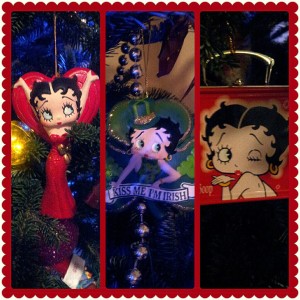 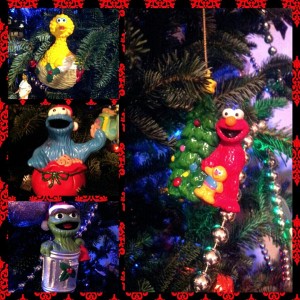 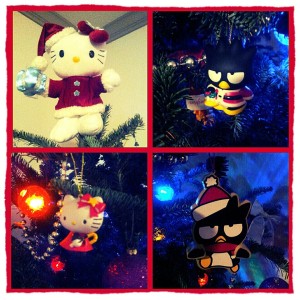 And instead of coal, we thought these ornaments would be much more punishing for those humbuggers this year…! 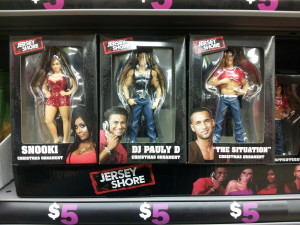 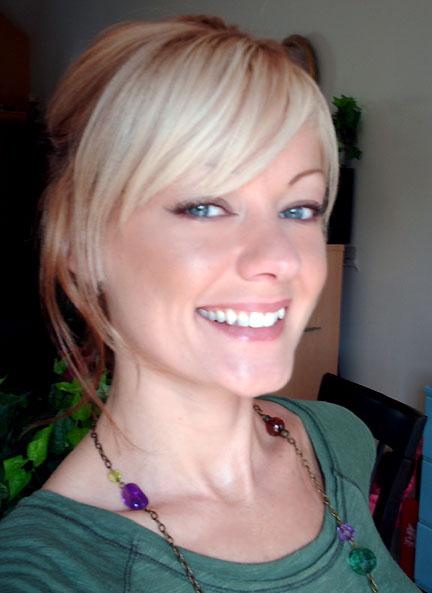